Fill the Sky is about three dear middle-aged friends, Tess, Ellie, and Joline, who travel to Ecuador in hopes that a shaman can cure Ellie’s cancer. Tess is highly skeptical but will do anything to help. When an ancient ceremony goes awry and a betrayal shakes the foundation of their friendship, each woman is forced to face her own deep need of healing. You’re hoping this novel sparks dialogue among women. What dialogue(s) do you want to have?

who we want to be. The women in this book are in their middle years, that time when we often wonder what the heck we are doing in the life we have chosen and what we should be doing next. Culturally, this idea was branded as a male issue, the mid-life crisis, and the idea of freaking out and buying a sports car on a whim became acceptable while the wife remained calm and held down the fort at home. Women aren’t as allowed to have a similar crisis, and yet we face enormous changes and challenges during this time. The role of mother changes drastically as our kids gain their independence and move on. The impact we have on a day-to-day basis is less obvious. Where does daily satisfaction come from? What is the best use of your time? For those who are married, it’s been for a long time now. Are you still compatible with that person? For those who chose to prioritize their career, have you achieved what you hoped? Were the trade-offs you had to make worth it? And the most important questions: are you happy? Are you fulfilled? And if not, what are you going to do about it? These are hard conversations that many women don’t give themselves permission to have. If my book can instigate some of that dialogue, I’d be delighted.

You were a highly successful entrepreneur. What led you to pursue a business first, then come back to writing? Were there no writing-related jobs you wanted initially?

Have you traveled to Ecuador and worked with shamans?

Yes, I have been to both Ecuador and Peru to work with shamans. Every ritual in the book except one is something I have experienced myself.

Have you participated in an ayahuasca ceremony? What is its purpose?

I have. Ayahuasca, which is a brew that comes from an ancient vine, has been used for centuries in the Andes. It is considered in this country to be an hallucinogenic, but local shamans will tell you that you are not hallucinating (as you would with LSD, for example) but that you’re allowing yourself to see the truth within, even if that truth involves journeying to another part of the world or what may feel like another dimension. They believe everything you experience is something that is alive within us somewhere. It is a very powerful experience and not for the faint of heart.

Can you explain the controversy surrounding the ceremony?

This is an American controversy, because we are always looking for the silver bullet, the quick fix. And unfortunately, I think some people have begun to believe that through one or two ayahuasca ceremonies they will immediately be “shown the light,” and can then rush back into their chaotic lives as an enlightened person. In my experience, peeling back the layers of the stuff we have encased ourselves in—whether that be the responsibilities we have taken on, the expectations we have set for ourselves, the old wounds we have never addressed—to get to what really matters is hard work that takes years. Every ceremony, and there are several very different kinds in the book, can have an enormous impact, but there is no one immediate answer. I think it’s also important to point out that ayahuasca can be dangerous if you are not with a master who knows what he or she is doing. So the onslaught of mostly American executives rushing down to Peru to have their go at ayahuasca is a situation ripe for disaster.

What do you want people to take away from reading this book? 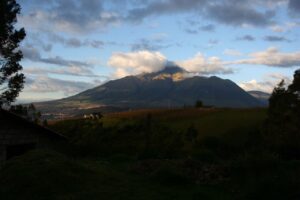 If there is one thing I’d like people to take away I suppose it is that an engaged life is a complicated life, rarely perfect, and it rarely goes according to plan, but that we are never really stuck if we can find a way to listen inside for what’s important and then trust that. This is much easier said than done, and we all need support and facilitation along the way. This support can take many forms, whether that be a friend, a therapist, a shaman or a dog. I hope after putting this book down, readers might be a little easier on themselves and what they see as their own shortcomings, missed opportunities, or mistakes and a little more open to seeking out ways to move beyond them.

More books, I hope! I’m pretty addicted to writing, so I’m hopeful that it always remains a central part of what I do. But my overarching goal in life is to play a role in building empathy in the world through the sharing of stories, in whatever form they take. While I hope I continue to have interesting stories to tell that touch people’s lives, there are so many marginalized voices out there with important stories, and I’d like to play a role in bringing those to the fore. My work at GrubStreet is all about that. There may be additional avenues for that work that come to light down the road. I’m always open to new adventures.

Outside of being a voracious reader, I get a lot of creative inspiration from long-form screen drama, whether that is movies or TV series. There was maybe a year’s time when I was writing this book, for example, when I re-watched the entire series of “The West Wing” whenever I took a break to exercise. Aaron Sorkin’s dialogue is like magic to me. I love his characters and the intensity of emotion he manages to convey while handling very complicated topics. On the flip-side of that long form, I also find song lyrics to be very inspiring. I think of it as poetry set to mood music, and as a novelist, I am always amazed by how much can be conveyed in very few words. Masters of that craft like Bob Dylan, Robert Hunter, Janis Ian, and Joni Mitchell come to mind. Life inspiration comes every time I hear about a girl or woman who stands up for herself against the odds, or any woman who dilutes hatred in society by taking the risk of demonstrating the power of love and compassion. The world needs much more of that.